‘Yes’. It was a simple word, spoken by a daughter to her father, which was full of huge significance and emotion for the Obst family. For the first time in her 23-year life, daughter Chelsea was able to directly answer a question that her father, Mark Obst, asked her – thanks to the assistive technology of an eye-gaze device.

Chelsea, a resident of Lutheran Disability Services (LDS) accommodation in the Barossa, has Rett Syndrome and is non-verbal. Until now she has been unable to communicate through anything but basic actions.

‘Chelsea will let me know if she doesn’t want to do something or doesn’t want to eat a certain food through her actions, but the eye-gaze device allowed her to communicate in a real way for the first time’, says Mark.

‘You can’t imagine how I felt, to have my adult daughter respond to me for the very first time.’

Mark was visiting Chelsea when the LDS team and a speech therapist were testing the eye-gaze device with her. Eye-gaze technology helps people with significant physical disabilities to operate a computer using just their eyes. A special camera tracks eye movements, in turn moving a mouse on the computer screen, enabling the user to communicate, play games, undertake learning or operate other devices connected to the computer.

At first it seemed Chelsea wasn’t particularly interested – ‘she wasn’t focussing and the team thought that maybe the device wasn’t right for her’, Mark recalls. But when Mark began asking her questions something clicked, and Chelsea started to use the gaze device to talk to him.

‘I asked Chelsea if she’d like to come home with me for the weekend and suddenly she moved her eyes and the machine responded with a “yes”, says Mark. ‘You can’t imagine how I felt, to have my adult daughter respond to me for the very first time.’

The LDS team and speech therapist watched amazed as Chelsea was able to maintain her first ever conversation with her dad, who was understandably ‘blown away’ by the experience.

To conclude the session the team went through some eye-gaze trial questions, with Chelsea easily able to point out her favourite foods (Cheezels and chocolate) and answer a range of other questions using the device.

Chelsea’s success with the device prompted the LDS team to secure a National Disability Insurance Scheme (NDIS) plan review for her, allowing Chelsea to rent her own eye-gaze unit.

The device will give Chelsea, who found her happy home at LDS in January 2019, even more opportunities to connect with her family, friends, housemates and support workers in the future.

Written by Jess Smith for the Lutheran Church SA-NT District’s magazine, Together. Reprinted with permission. 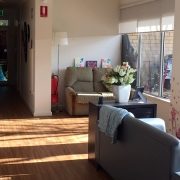 If you know a suitable person who would love to find their happy home with us, please talk to one of our friendly Client Intake team.